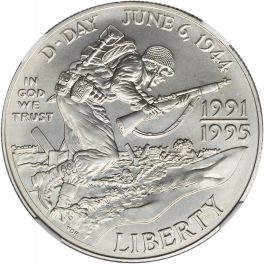 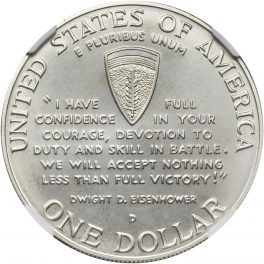 The 1991-1995 $1 Silver World War II Commemorative Coin was issued in 1993, even though its dates read 1991-1995. This coin commemorates the beginning of the United States of America’s involvement in World War II and the end of the war in 1945. This coin was made for the 50th anniversary. The regular issue price of the coin was $28. The coin was designed solely by Thomas Rogers. This coin was minted at the Denver Mint.
Obverse: D-Day June 6, 1944 – 1991 1995 – Liberty – In God We Trust | Reverse: United States of America – One Dollar – E Pluribus Unum – “I Have Full Confidence In Your Courage, Devotion to Duty and Skill in Battle. We Will Accept Nothing Less Than Full Victory!” Dwight D. Eisenhower