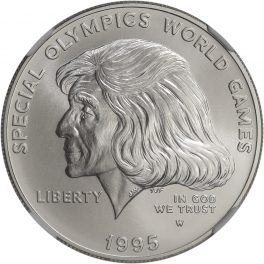 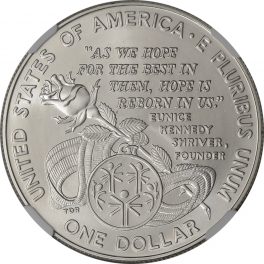 The 1995 $1 Silver Special Olympics Commemorative Coin was designed by James Ferrell and Thomas Rogers. The proof variety can often be worth a small percentage more than a regular strike. The obverse shows the portrait of Eunice Kennedy Shriver, and the reverse shows a rose and a medal. Look for coins with good luster and a great strike. This coin was minted at the West Point Mint.
Obverse: Special Olympics World Games – In God We Trust – 1995 – Liberty | Reverse: United States of America – E Pluribus Unum – One Dollar – “As We Hope For the Best in Them, Hope is Reborn in Us.” Eunice Kennedy Shriver, Founder