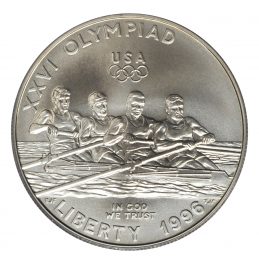 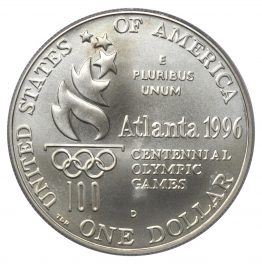 The 1996 $1 Silver Rowing Commemorative Coin was created for the XXVI Olympiad celebrated in Atlanta, GA in 1996. This particular coin shows a four man rowing team participating in the events. The reverse shows a torch, the Olympic rings, and a “100” to signify the 100th anniversary of the modern Olympic games being played. These coins are popular to young collectors and provide a lot of history. Each design is unique, thanks to Bart Forbes and Thomas Rogers, the designers of both the obverse and reverse. The Mint sold this coin for $32 at the initial release. This coin was minted at the Denver Mint.
Obverse: XXVI Olympiad – USA – Liberty – 1996 – In God We Trust | Reverse: United States of America – One Dollar – E Pluribus Unum – Atlanta 1996 – Centennial Olympic Games – 100