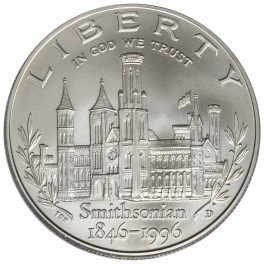 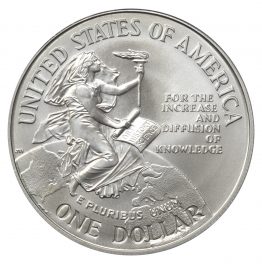 The 1996 $1 Silver Smithsonian Commemorative Coin features a striking design of the main building in the Smithsonian complex. The Smithsonian opened in 1846 and this coin was meant to celebrate the 150th anniversary. The obverse, designed by Al Maletsky and James Ferrell, shows the Castle at the Smithsonian Institute. On the reverse is a figure holding a torch and scroll with the Earth in the background. This coin is a popular collector’s choice, however it is fairly easy to find. This coin was minted at the Denver Mint.
Obverse: Liberty – In God We Trust – Smithsonian – 1846-1996 | Reverse: United States of America – One Dollar – E Pluribus Unum – For the Increase and Diffusion of Knowledge