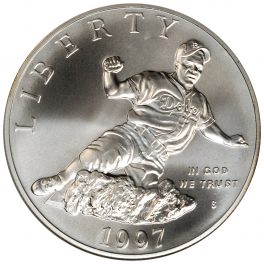 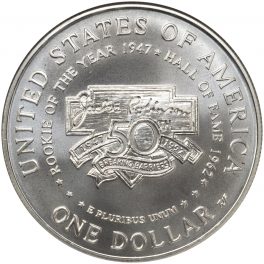 The 1997 $1 Silver Jackie Robinson Commemorative Coin is a crowd favorite coin. Whether for the history or the design, this coin is sought after in all denominations. This coin can easily be found in all grades, so we encourage you to go after the MS70 coins to make your collection truly special. Jackie Robinson was born in 1919 during the times of racial conflict. It was not popular to have an African American in sports. In 1935, Jesse Owens began to break the racial barrier by participating in the Olympics. Twelve years later, Jackie Robinson joined the Brooklyn Dodgers to become the first African American to join a major league baseball team. Jackie Robinson ended up being showered with awards, such as all of Baseball’s Most Valuable Player in 1949, and Rookie of the Year two years earlier. Later, he was inducted into the Hall of Fame. This coin’s beautiful design was created by William Cousins and James Peed. The obverse of the coin shows Jackie Robinson sliding into the plate, and the reverse shows a memorial crest. The original price for this coin was $32. This coin was minted at the San Francisco Mint.
Obverse: Liberty – In God We Trust – 1997 | Reverse: United States of America – One Dollar – Rookie of the Year 1947 – Hall of Fame 1962 – E Pluribus Unum – Jackie Robinson 50th – Breaking Barriers