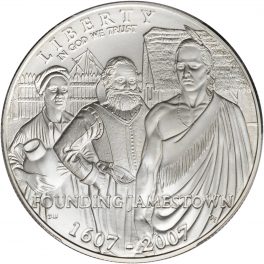 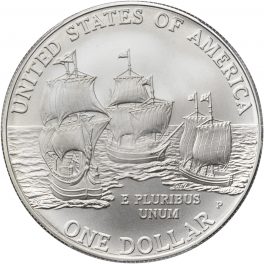 The 2007 $1 Silver Jamestown Commemorative Coin obverse shows three figures, one of which is an Indian, standing in front of a village in the background. The reverse depicts three ships sailing on the ocean. This coin was produced to commemorate the 400th Anniversary of the founding of Jamestown. The original issue price of this coin was $35. This coin was minted at the Philadelphia Mint.
Obverse: Liberty – In God We Trust – Founding Jamestown – 1607-2007 | Reverse: United States of America – One Dollar – E Pluribus Unum