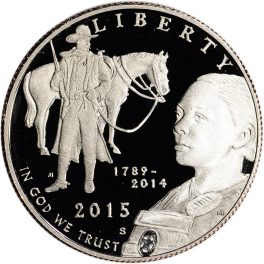 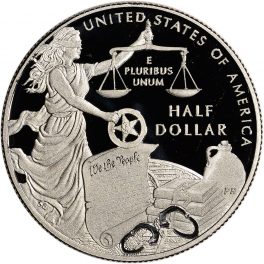 The 2015 $0.50 Clad U.S. Marshals Service Commemorative Coin shows an armed man and his horse on the obverse, as well as a female figure in the foreground. The reverse shows a female holding scales, which is typically symbolic of judgement. Prehaps, this female stands for the judgement that the U.S. Marshals Service is exercising on those that it captures. This coin was minted at the Denver Mint.
Obverse: Liberty – In God We Trust – 2015 – 1789-2014 | Reverse: United States of America – E Pluribus Unum – Half Dollar