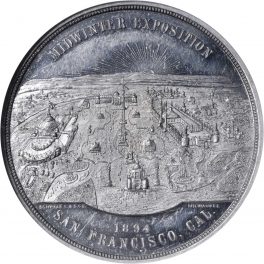 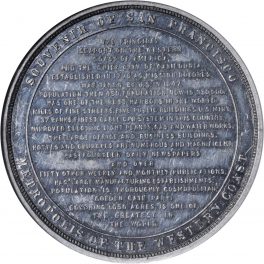 Diameter: 45.00 mm
Mintage/Proof: NA / 0
Weight: NA
Metal: Aluminum
I Own 1894 So Called Dollars Commemorative and Exposition
Add To My Collection
View My Collection

This So-Called Dollar is given the catalog number HK-255

The obverse text on this So-Called Dollar reads Midwinter Exposition 1894 San Francisco, Cal and the reverse text is Souvenir of San Francisco, Metropolis of the Western Coast, The principal seaport on the Western coast of America and the Chief city of California, Established in 1778 as Mission Dolores was taken by U.S. in 1847, Population then 450, population now is 850,000. Has on of the best harbors in the world, miles of fine streets, fine public buildings, U.S. Mint, 37 banks, best cable car system in the country, improved electric light plants, gas and water works, the large office and business buildings, hotels and churches are numerous and magnificent, had fourteen daily newspapers and over fifty other weekly and monthly publications, has large manufacturing establishments, population is thoroughly cosmopolitan, Golden Gate Park, covering 1,050 acres is one of the greatest in the world. The front side of the coin shows an aerial view of the port city of San Francisco, showing buildings and the oceans with the sun rising in the background and text arching in a single line above, and double lines below. The backside of the coin depicts 22 lines of interesting facts about San Francisco with two arching lines, one above and one below titling the words on the coin.