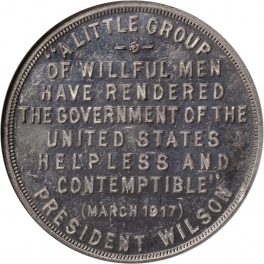 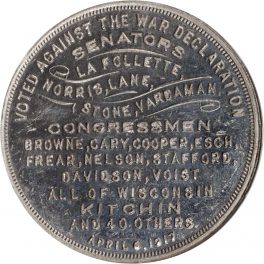 Diameter: 38.00 mm
Mintage/Proof: NA / 0
Weight: NA
Metal: Aluminum
I Own 1917 So Called Dollars Other
Add To My Collection
View My Collection

This So-Called Dollar is given the catalog number HK-885

The obverse text on this So-Called Dollar reads A little group of willful men have rendered the Government of the United States helpless and Contemptible (March 1917) President Wilson and the reverse text is Voted against the war declaration, Senators La Follette, Noris, Lane, Stone, Vardaman. Congressmen Browne, Gary, Cooper, Esch, Frear, Nelson, Stafford, Davidson, Voight All of Wisconsin Kitchen and 40 Others April 6, 1917. The front side of the coin shows a small flower in the upper center surrounded by lines of text shown as a quote and a name at the bottom. The backside of the coin depicts lines of text with the names of men throughout done in a very artistic fashion. 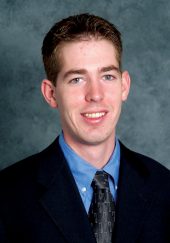