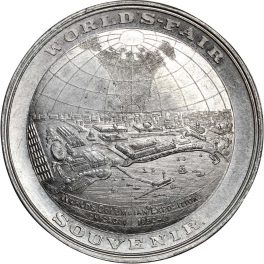 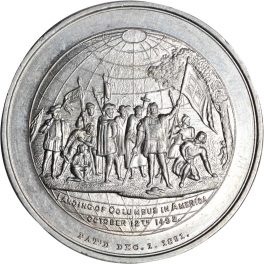 Diameter: 44.00 mm
Mintage/Proof: NA / 0
Weight: NA
Metal: Aluminum
I Own 1893 So Called Dollars Commemorative and Exposition
Add To My Collection
View My Collection

This So-Called Dollar is given the catalog number HK-174

The obverse text on this So-Called Dollar reads Worlds-Fair Souvenir, Worlds Columbian Exposition Chicago 1892-3 and the reverse text is Landing of Columbus in America October 12th 1492 Pat’d Dec. 1 1891. The front side of the coin shows an aerial view of the Chicago World’s Fair showing all of the buildings, the docks, and the water on a globe, commonly called a “Globe Dollar”. The backside of the coin depicts an image of Columbus landing in the center with his flag, spears, crosses, and several other men, all positioned on top of a globe with text and dates below.