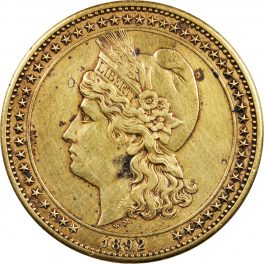 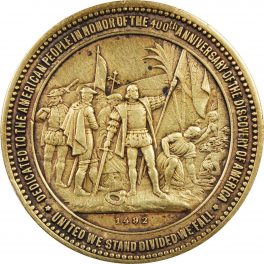 Diameter: 35.00 mm
Mintage/Proof: NA / 0
Weight: NA
Metal: Gilt
I Own 1893 So Called Dollars Commemorative and Exposition
Add To My Collection
View My Collection

This So-Called Dollar is given the catalog number HK-221

The obverse text on this So-Called Dollar reads Liberty 1892, W.M and the reverse text is Dedicated to the American People in honor of the 400th Anniversary of the Discovery of America, United we stand divided we fall, 1492. The front side of the coin shows a female bust facing the left with four flowers in her crown, wheat stalks, and flowing hair. The backside of the coin depicts a man in the center, who is identified as Christopher Columbus, holding a flag and a sword. The man to his left is looking up at him and Native Americans are bowing in the background. The men to his right are holding guns, flags, and spears. The image is surrounded by text and dates.