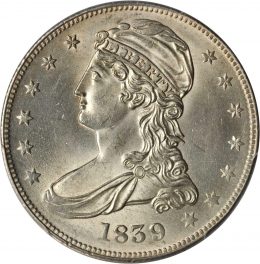 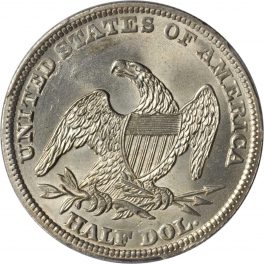 History, Information, and Value of 1839 Capped Bust Half Dollar

Guidelines for Collecting: The year 1839 saw a reduced number of Reeded Edge half dollars minted, certainly as a result of the advent of the Liberty Seated half dollar in the same year. Even so, examples are not too difficult to come by. For collectors wanting an example of the type with the denomination expressed as HALF DOL., both 1838 and 1839 are good choices, with 1839 slightly harder to obtain. Similar to other years, strike quality can vary, and the obverse stars, in particular, are sometimes weak on coins of this year. Sharply struck coins do exist, however, and can be located with patience. Eight obverse and reverse die pairs are known, of which two are moderately scarce (GR-2 and GR-3) and one (GR-1) is exceptionally rare and deserves special mention.
The GR-1 variety, popularly known as the 1839 Small Letters reverse, was struck with a normal obverse and a pattern reverse die, and there are only ten examples known today, most well circulated. The reverse legend indeed, has smaller letters than the reverse of a normal example and the eagle is also smaller and more compact. However, the easiest way to tell the difference is by the relationship of the olive branch and lowest arrow feather. On a Small Letters Reverse, one feather will barely peek out from under the branch, whereas on a normal example, multiple feathers are seen below. Because this variety is published in the Guide Book of United States Coins, it is well-known and examples sell for substantial premiums.
Availability: Like other Reeded Edge half dollars, circulated and Mint State pieces are obtainable, with the majority of pieces found today in the mid circulated grades. Uncirculated coins are scarcer, and in MS-64 or finer, the issue is considered rare. In all grades, the 1839 is more difficult to come by than both the 1837 and 1838. All Proofs are exceedingly rare, and are virtually unobtainable.