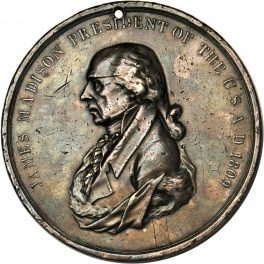 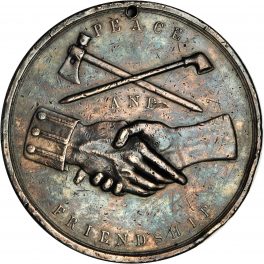 The Indian Peace Medals have a strong history in the American Indian Policy. These silver medals were often presented to the leaders of the tribes as a symbol of allegiance. The act of giving the Indian Peace Medals did not begin in America. Thomas Jefferson often spoke of how negotiators of treaties would be given medals in appreciation for their work. The medals were distributed any time a major event took place, such as a treaty being signed, Indian’s visits to the Capitol, or government officials visits to the Indian Territory.

The medals followed some guidelines: they were only given to individuals of importance, the largest medal would be given to the chief and smaller medals would be given to less distinguished warriors and principal war chiefs, they were presented using all of the formalities of government, and the Peace Medal should be worn in place of any other foreign medal.

Enjoy seeing some of this rich history of American Indians as you look through the medals. If you see a medal that you may own, please contact an expert to have it verified. Some of these medals were reproduced as modern mint items, so they will carry very little value.