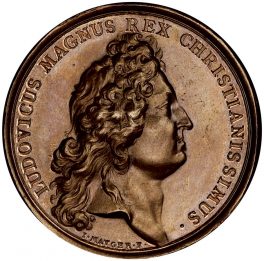 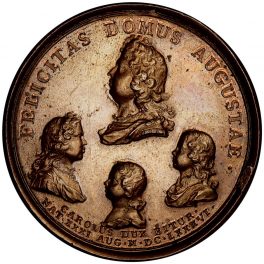 The Europeans gave medals to the Native Americans in apparently actions of good will and trade. While this particular style of medal was not created simply for the Indians, it found it’s eventual use as a good-will symbol. This extremely rare medal features a bust of Louis XIV, facing to the right, laurel crown about his head. Beneath the image is a signature, “H. Rovssel. F.” This signature sets this medal apart from various others that are nearly identical but lack that particular signature. Reverse features four members of the French Royal family all in profile, the Dauphin, the Duke of Burgundy, Duke d’Anjou, Duke de Berri. Their names are written by the images. All figures are in profile with flowing hair. The Latin featured on the reverse of the medal reads, “The pride of the Royal House”. Records indicate this medal is slightly different that the previous Indian medal, with the main difference being in the style of hair worn by Louis XIV on the obverse.