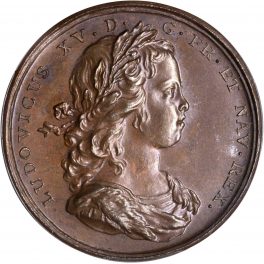 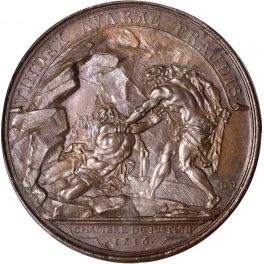 History, Information, and Value of 1716 Chamber of Justice Medal

Value of 1716 Chamber of Justice Medal

Obverse of this medal pictures a youthful Louis XV in armor and draped. Around his image written, “Louis XV, by the grace of God, King of France and Navarre”. Reverse pictures Hercules dragging Cacus from a cave after his thievery of Hercules’s cows. The stolen beasts can be seen inside the mouth of the cave. The image is meant to represent the sad state of French finances at the conclusion of Louis XIV’s reign. Around the image on a scroll is written, “The avenger of avaricious fraud; Chamber of Justice, 1716.” Near the right heel of Hercules is the artist’s signature, “DV” for Du Vivier.