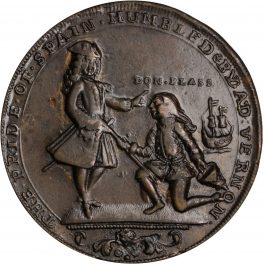 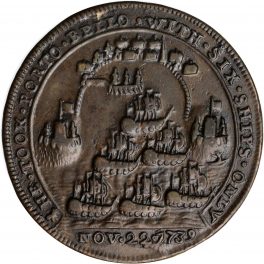 This medal celebrated Admiral Edward Vernon’s success over the Spanish. The English celebrated his victories with many similarly designed medals. While not historically accurate, this medal depicts Don Blas, the commander of the Spanish Fleet, kneeling before Vernon and surrendering his sword. In actuality, Blas escaped before the English took the fleet. Vernon, on the left, faces to the three-quarters right, his right hand receiving Blas’s sword and his left hand extended. Behind Blas sails a ship to the right. Around the image states, “The pride of Spain humbled by Admiral Vernon” with a small cross between the words “humbled” and “by”. Blas is recognized by his name appearing over his head. Reverse depicts the six ships entering the harbor. The legend states, “He took Porto Bello with six ships only” and in exergue “Nov 22 1739”. Since the British success over the Spanish fleet and Blas at Carthagena took place in 1741, we can hereby date this medal by that year.

The obverse and reverse text read as follows: The Pride of Spain Humbled by + Ad: Vernon; Don Blass; | and | He Took Porto Bello With Six Ships Only; Nov. 22. 1739.