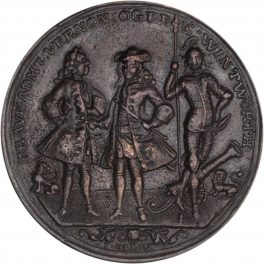 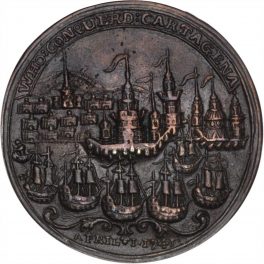 History, Information, and Value of 1741 Cartagena with Admiral Vernon, Ogle, and Wentworth Medal

Value of 1741 Cartagena with Admiral Vernon, Ogle, and Wentworth Medal

This medal celebrated Admiral Edward Vernon’s success over the Spanish. The English celebrated his victories with many similarly designed medals. Obverse depicts Vernon in the middle flanked on the left by Sir Ogle, Admiral of the Fleet and by General Wentworth on the right. Ogle, on the left, faces to the right while Wentworth faces forwards holding a staff. Behind him is a cannon and two lions rest on the far right and left. The legend states, “Brave Admiral L. Vernon, Ogle, and Wentworth”. Reverse depicts six ships sailing right, one left, as they enter the harbor. The legend states, “Who conquered Carthagena” and in exergue under the scrollwork, “April 1, 1741.”