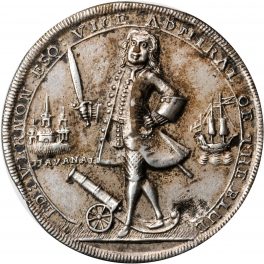 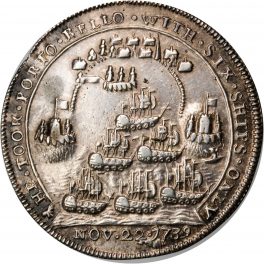 History, Information, and Value of 1741 Admiral Vernon in Havana Medal

This medal celebrated what was deemed Admiral Edward Vernon’s success over the Spanish. In actuality, the British lost the battle at Carthagena and suffered heavy losses. The English celebrated his victories with many similarly designed medals. Obverse depicts a full-figured Vernon facing three-quarters left, sword in his right hand and his left on his hip. The field at left displays a castle with three turrets and below that states, “Havana”. A cannon rests at his feet and to the right is a ship in the distance. Around the image states, “Ed. Vernon Esq. Vice Admiral of the blue.” Reverse depicts the six ships entering the harbor. The legend, begins with a small butterfly and states, “He took Porto Bello with six ships only” and in exergue “Nov 22 1739”. Since the British success over the Spanish fleet and Blas at Carthagena took place in 1741, we can hereby date this medal by that year.