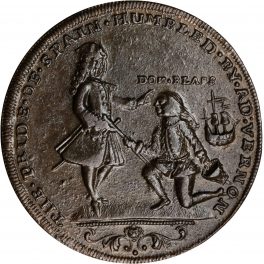 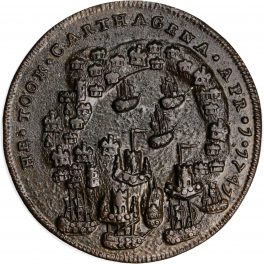 This medal celebrated Admiral Edward Vernon’s success over the Spanish. The English celebrated his victories with many similarly designed medals. While not historically accurate, this medal depicts Don Blas, the commander of the Spanish Fleet, kneeling before Vernon and surrendering his sword. In actuality, the British lost the battle at Carthagena and suffered heavy losses. Vernon, on the left, faces to the three-quarters right, his left hand extended and his right receiving Blas’s sword. Behind Blas sails a ship to the right. Around the image states, “The pride of Spain humbled by Admiral Vernon” and Blas is recognized by his name appearing over his head with the “n” backwards. Reverse depicts an aerial view of the harbor with four ships sailing into a harbor, which is flanked by two forts. One ship already rests in the harbor, which appears in a horseshoe shape dappled with houses. Around the image states, “He took Carthagena April 1, 1741”, a small circle seperating each word.

The obverse and reverse text read as follows: The Pride of Spain Humbled by Ad: Vernon; Don Blass; | and | He Took Carthagena Apri 1 1741.