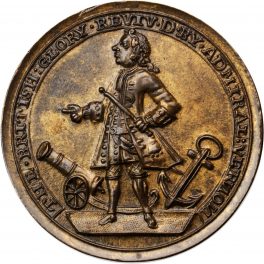 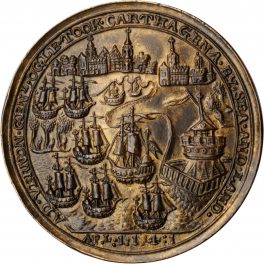 This medal celebrated Admiral Edward Vernon’s success over the Spanish at the port city of Carthagena. The English celebrated Vernon’s many victories with many similarly designed medals. The obverse of this medal features a full-length figure of Vernon, facing to the left, a baton in his left hand and his right hand extended. Behind Vernon are a cannon and an anchor. The obverse legend states, “The British : Glory Reviv D by Admiral Vernon”. Reverse depicts a large fort on the right and seven smaller ships and two boats sailing into the harbor at left. Around the image states, “Admiral Vernon, General Ogle took Carthagena by sea and land” and in exergue, “April 1, 1741”.

The obverse and reverse text read as follows: The British : Glory Reviv D. By Admiral Vernon | and | Ad. Vernon Genl Ogle Took Carthagena By Sea And Land; Apl : I : 174 : 1.