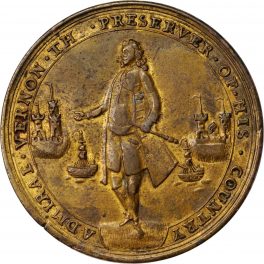 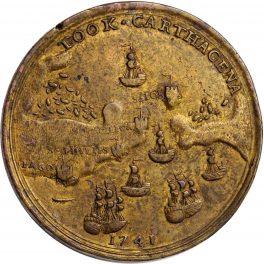 This medal celebrated Carthagena, which the British fought against the Spanish and lost while suffering heavy causalities. The British created thirty-one different medals celebrating Carthagena, all of which portray the battle inaccurately as a win for the British. This medal displays Admiral Vernon on the obverse, standing full-figure facing three-quarters left with his right hand extended and his left holding a baton. Two forts flank him in the background and in front of the forts are two ships. The legend enclosed by a line states, “Admiral Vernon, the preserver of his country”. Reverse displays an aerial view of Carthagena with two ships and four boats sailing towards the strait between two islands. The island on the left displays three forts named, “Bocachica”, “S. Philips” and “Iago”. Around the image states, “Took Carthagena”.

The obverse and reverse text read as follows: Admiral Vernon the Preserver of His Country | and | Took Carthagena; 1741.