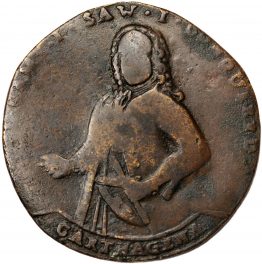 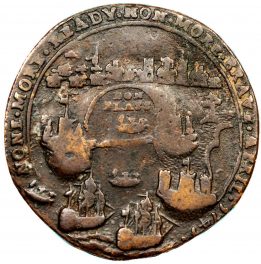 This medal celebrated Carthagena, which the British fought against the Spanish and lost while suffering heavy causalities. The British created thirty-one different medals celebrating Carthagena, all of which portray the battle inaccurately as a win for the British. This medal displays a half-length figure of Admiral Vernon on the obverse, facing three-quarters left with his right hand extended and his left holding a baton. Two forts flank him in the background and in front of the forts are two ships. The legend states, “I came I saw I conquered” each word separated by a small dot. Reverse displays Carthagena with three ships and four boats sailing towards forts in the middle. The town is displayed in a straight line, the buildings pointing up at the legend, which states, “None more ready non [sic] more brave, April 1741.” The ship in the middle is labeled, “Don Blass”.

The obverse and reverse text read as follows: I Came I Saw I Conquered; Carthagena | and | None More Ready Non [sic] More brave. April 1741; Don Blass.