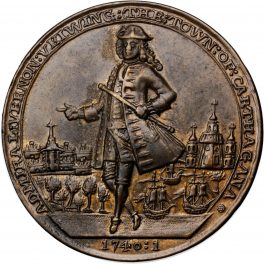 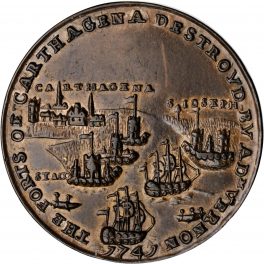 This medal celebrated Carthagena, which the British fought against the Spanish and lost while suffering heavy causalities. The British created thirty-one different medals celebrating Carthagena, all of which portray the battle inaccurately as a win for the British. This medal displays a full-length figure of Admiral Vernon on the obverse, facing three-quarters left with his right hand extended and his left holding a baton. Two forts flank him in the background and in front of the forts are trees on the left and two ships on the right. The legend states, “Admiral Vernon Veiwing [sic] the town of Carthagana [sic]” each word separated by a colon. Reverse displays Carthagena with two ships sailing right and two boats in the rear. The fort on the right of the strait is labled, “S. Ioseph” and on the left is the fort, “S. Iago.” Carthagena is seen and labeled nearly the top of the medal. Around the scene is written, “The Forts of Carthagena Destroyd by Admiral Vernon” and in exergue, “1741”.