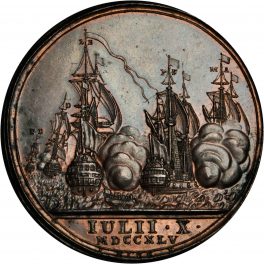 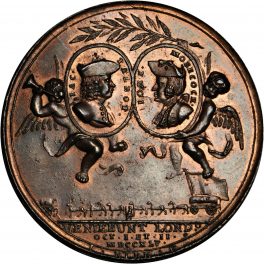 This medal was struck to commemorate victory over the Spanish privateers off the coast of Lima. Obverse displays a battle between several ships; smoke bellowing from the cannons and the sides of the ship. The ships are labeled, “Le”, “PF”, and “MA” for Lewis Erasmus, Prince Frederick, and Marquis D’Antin. The last two ships are labeled, “ND” and “D” for Notre Dame and Duke. The artist’s signature, “I. Kirk F” is apparent on the lower edge of the medal. There is no legend but the exergue gives the date, “July 10, 1745.” Reverse displays two medallions held up by angels, with two busts, one for James Talbot and the other for John Morecock, two of the captains in the naval battle. Above the exergue is a carriage driven by six horses and below that the translation, “They came to London, October 1st and 2nd, 1745”.