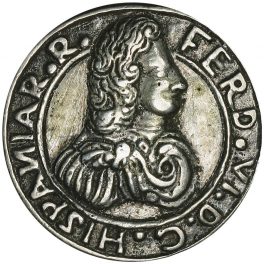 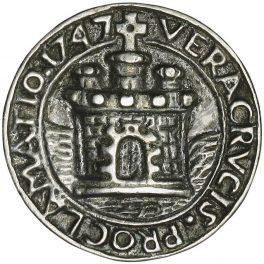 This medal celebrates Spain in the New World in 1747. Obverse features a crudely designed bust of the King of Spain, Ferdinand VI, facing to the right, in a wig and draped. The legend around his image translates, “Ferdinand, by the grace of God, King of Spain and the Indies” with the final “r” reversed. The reverse displays a castle with three towers, the largest tower in the middle out of which appears a cross. The castle rests on waves. The legend translates, “Proclamation of Vera Cruz 1747”.