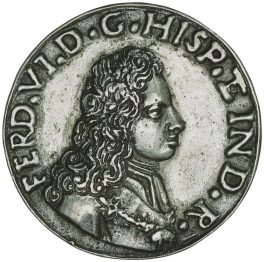 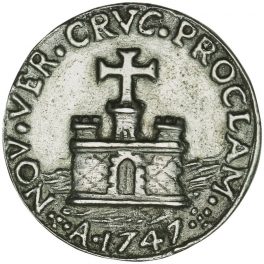 This medal celebrates Spain in the New World in 1747. Obverse features a bust of the King of Spain, Ferdinand VI, facing to the right, wearing armor and the Golden Fleece around his shoulders. The legend around his image translates, “Ferdinand, by the grace of God, King of Spain and the Indies”. The reverse displays a castle with three towers, the largest tower in the middle out of which appears a cross. The castle rests on waves. The legend translates, “Vera Cruz proclaims him” and at the bottom, “1747”.