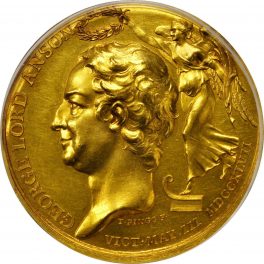 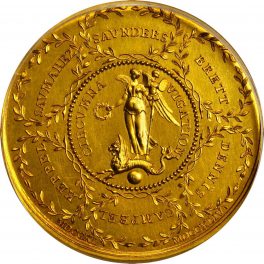 History, Information, and Value of 1747 Lord Anson in Gold To Mark His Circumnavigation of the Globe Medal

George Anson, first Baron Anson, circumnavigated the globe over a period of three years. He began the voyage with six ships and concluded with one. Obverse of the medal celebrates Anson’s victory of the French and depicts him facing to the left, Victory behind his head holding a laurel crown. Around the image states “George Lord Anson, Victory, May 3, 1747”. The artist signature is evident below the bust and reads, “T. Pingo. F.” Reverse depicts Victory standing on a sea monster in the middle of six laurel wreaths, which surround the names of the six officers of Anson’s ship, the “Centurion”. The names read, “Keppel, Savmarez, Savnders, Brett, Dennis, Campbel”. Out of the golden medals, fewer than ten are estimated to be in existence today.