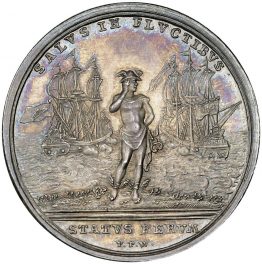 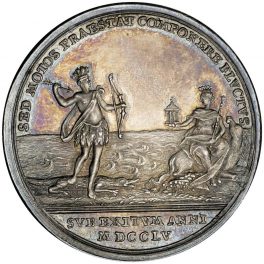 The Franco-American jeton medal series attempted to portray the wealth and habitability of the colonies in an effort to promote French settlement. This extremely rare medal may have originated in Germany as the signature on the obverse “PPW” possibly stands for Peter Paul Werner, a German engraver. The obverse displays Mercury in the center as he stands on the shore, his right hand behind his ear as he listens to the two ships flanking him. The left ship displays the harp of Ireland and the right the French lilies. The legend states, “Safety at sea” and in exergue, “The condition of the affairs at the close of the year, 1755”. Reverse displays an Indian on the shore, carrying a crown and a bow and arrow. Behind him is an alligator. To the right is a woman on a seahorse holding a Temple of Fame, a scepter, and at her feet rests a cornucopia. The legend translates, “But he has power to soothe the troubled waves”. Only three known medals are in existence today.