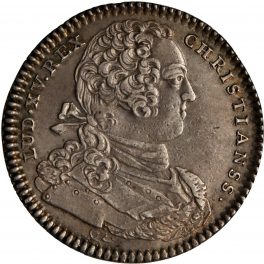 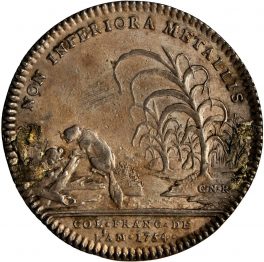 The Franco-American jeton medal series attempted to portray the wealth and habitability of the colonies in an effort to promote French settlement. The obverse of this popular medal displays King Louis XV, facing to the right wearing armor. The legend translates, “Louis VX, Most Christian King”. The reverse displays a beaver atop a dam. The beaver signifies the importance of beavers and that the value of the land is worth more than gold. The legend verifies this observation as it translates, “[The products of the Colonies are not] inferior to the medals”. To the right of the beaver is a field of Indian corn and underneath is the artist’s initials, “C.N.R.”