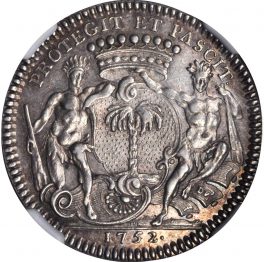 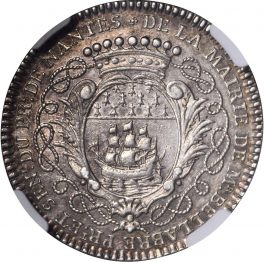 The Compagnie Des Indies was a remnant of the sour schemes of John Law who successfully cheated many out of investing in the New World. This medal displays the Compagnie Des Indies arms, which portrays two Indians supporting a shield on which is a palm tree. Over the shield is crown. Around the image, the legend translates “He protects and feeds” and in exergue, “1752”. The reverse displays Mercury carrying a caduceus in his right hand as he flies over the ocean. On the distant shore is a small town under which are the litters, “C.N.R”, which possibly stand for C. Norbert Roettier of the French Mint. The legend on the reverse translates, “He creates commerce for both worlds.” And in exergue, “French Colonies in America 1752.”

They Flourish Under All Stars Medal