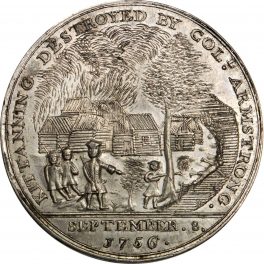 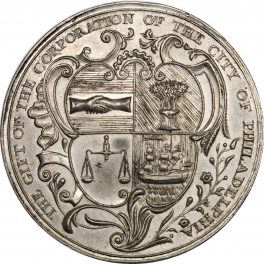 The Kittanning expedition took place in the Indian village of Kittanning, located in rural Pennsylvania in an attempt to kill two prominent Indian raiders. The raid was mostly a failure as the majority of the Indian raiders were not present in the camp and the colonial attackers suffered more casualties than the natives. These medals were created for the commissioned officers involved in the battle. The medal acknowledges the Colonial victory, the obverse featuring the former arms of Philadelphia. A shield quartered features two hands, wheat, a ship, and a scale in each quarter, respectively . The legend reads “The gift of the corporation of the city of Philadelphia.” The reverse displays Kittanning burning and in the foreground the militants are shooting an Indian on the right. The legend states, “Kittanning destroyed by Colonel Armstrong” and in exergue, “September 8, 1756”.

The obverse and reverse text read as follows: The Gift of the Corporation of the City of Philadelphia | and | Kittanning Destroyed by Coll. Armstron; September 8 | 1756.