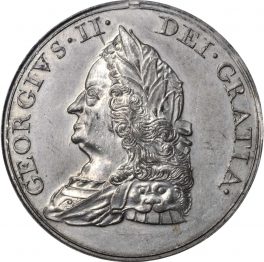 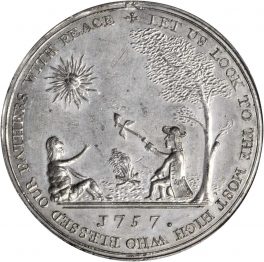 This American Indian medal was the first of its kind to be made in Philadelphia. Obverse displays George II, facing to the left wearing armor and a laurel crown. The legend translates, “George II, by the Grace of God”. Reverse displays a Quaker holding a peace pipe, while sitting across a fire from an Indian. The sun shines down on them from the left and a tree gives shade on the right. The legend reads, “Let us look to the Most High who blessed our fathers with peace” and in exergue, “1757”. The Quakers generally gifted medals to the Indians, which explains the scenario pictured on the reverse.

The obverse and reverse text read as follows: Georgivs II Dei Gratia | and | Let Us Look to the Most High Who Blessed Our Fathers with Peace; 1757 .