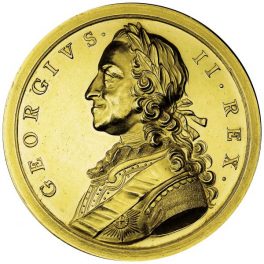 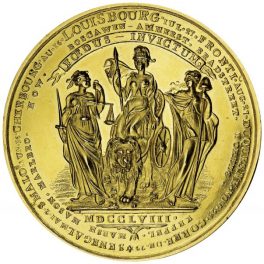 In response to a French medal that lists French acquisitions throughout the world, the British created this medal. Obverse features a bust of George II, facing to the left wearing a laurel crown, ribbon and star of the Garter. The reverse displays three women in draped cloth. Britannia sits in a chariot flanked by Justice to the left and Liberty to the right. The chariot is pulled by a lion and drives over the fleurs-de-lis strewn on the ground. Around the image listed names of all the British holdings and victories in 1758. The list names two victories in Africa, Senegal and Goree; two in Europe, St. Malo and Cherbourg; and three in America, below which are listed the British commanders, Captain Marsh, Major Mason, Duke of Marlboro, Commander Howe, and Admiral Keppel, respectively.