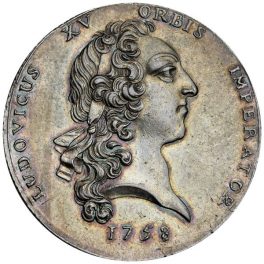 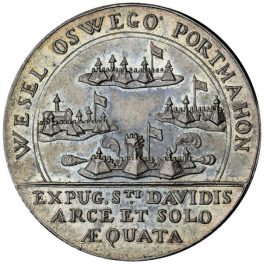 The Owego Captured Medal is the only medal on which the French named a victory during the French and Indian War. The victory at Oswego allowed the French a short-term victory against the British along with the seizing of British supplies. Obverse features Louis XV, facing to the right and wearing only a laurel wreath in his hair. His title in the legend translates, “Louis XV, Emperor of the World” and in exergue the date, 1758. Reverse displays the battle at Oswego, with four forts flying the French flag. The exergue translates, “The fort of St. David’s taken by storm, and leveled to the ground.” The legend lists three French ports from around the world, “Wesel, Oswego, Portmahon”.