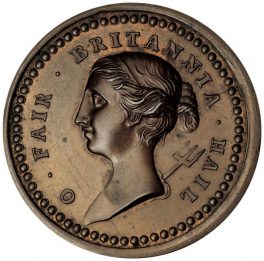 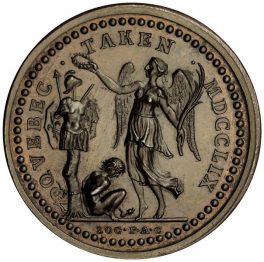 During the French and Indian War, the British attacked the Louisbourg Harbor and defeated the French. These medals celebrate the second attack and British victory. The obverse of this rare Louisbourg medal features a bust of Britannia facing to the left, her hair pulled back and a trident projected from her neck. The legend reads “Fair Britannia Hail”. The reverse image pictures Victory in draped cloth while on a ship carrying a palm branch over her left shoulder and a laurel wreath in her right hand. The legend reads, “Louisbourg Taken, 1758”. Both sides bear the artist’s name at the bottom, “I. Kirk. F.”

The Taking of Louisburg Medal