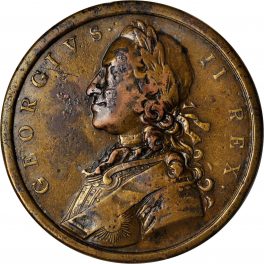 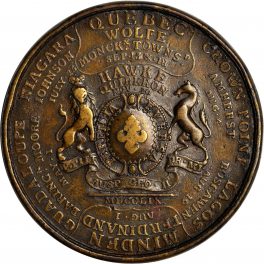 William Pitt was revered by the American Colonists and his fellow Englishman for his arguments for the common man, which gave rise to his nickname, “Great Commoner”. This medal displays a detailed bust of Pitt on the obverse. Pitt faces to the left, while wearing a braided wig and a coat. The legend states, “Rt Hourable William Pitt”. The reverse depicts a lion standing on his hind legs while leaning on a globe. In his right he holds a sword above his head. The legend reads, “Who rouze [sic] the British lion.”

The obverse and reverse text read as follows: Rt Honourable Wm Pitt | and | Who Rouze [sic] the British Lion.