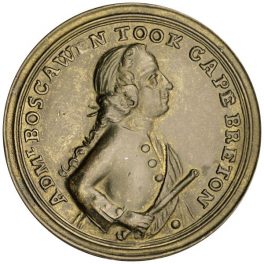 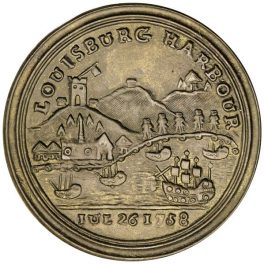 During the French and Indian War, the British attacked the Louisbourg Harbor and defeated the French. These medals celebrate the second attack and British victory. Obverse features half-length figure of Admiral Boscawen, the commander of the fleet, facing to the right wearing his uniform, a sash, and his hair tied back. The legend reads, “Admiral Boscawen took Cape Breton”. The reverse displays an image of the battle featuring five ships shooting at the city spread out over three hills. The legend reads, “Louisbourg Harbor” and in exergue, “July 26, 1758”. Unlike the previous medals of this battle, the image on the back is reversed and uses sharper details to display the battle.