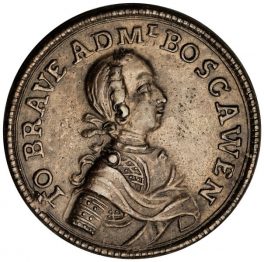 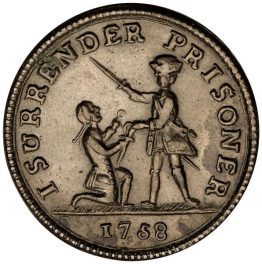 During the French and Indian War, the British attacked the Louisbourg Harbor and defeated the French. These medals celebrate the second attack and British victory. This rare medal features half-length figure of Admiral Boscawen, the commander of the fleet, facing to the right wearing his uniform, a sash, and his hair tied back. The legend reads, “To brave Admiral Boscawen”. The reverse displays an officer, intending to be Chevalier de Drucour the French commander at Louisbourg, kneeling and presenting his sword to an officer standing at the right. The officer at the right is holding de Drucour’s sword with his left and raising a sword with his right. The reverse legend reads, “I surrender prisoner” and in exergue “1758”.

1758The Taking of Louisburg Medal