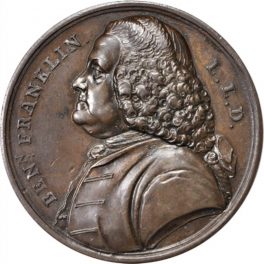 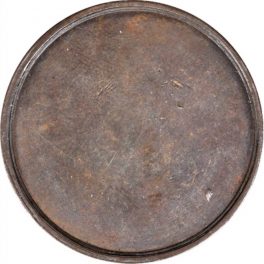 This Benjamin Franklin medal displays a bust of Franklin on the obverse facing to the left wearing a heavy wig and coat. The legend reads, “Ben Franklin, L. L. D.” The reverse is plain and bears no image or inscription. The bust on the obverse is credited to Isaac Gosset, a wax modeler who was known for his studies of contemporary celebrities. Early sources believed this portrait was associated with Franklin’s honorary Doctorate of Laws at St. Andrews in 1762. If the estimates are correct, this medal becomes the earliest Franklin medal known, although modern sources are still attempting to date this unique medal.

The obverse and reverse text read as follows: Benn Franklin L. L. D. | and | No Legend.