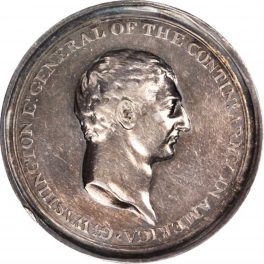 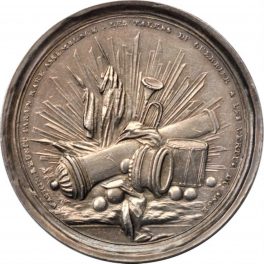 Obverse of the medal features a bust of Washington, facing to the right his hair in a cue pulled back with a ribbon. The legend around the image reads, “General Washington Er. General of the Continental Army in America.” The reverse displays a trophy of military supplies such as a cannon, mortar, balls, drum, flag, and trumpet all of which are lying on the ground. From behind the trophy are rays of light. The reverse legend reads, “Washington combines by a singular union the talents of a warrior and the virtues of a philosopher.”