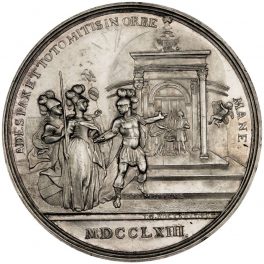 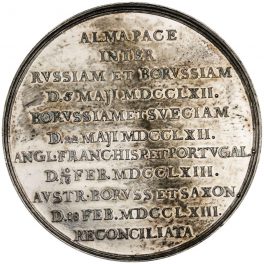 The Treaty of Paris, ending the French and Indian War, was signed in Paris on February 10, 1763. This medal commemorates that peace. Obverse a temple topped with the dual head of Janus, which in turn tops the Russian arms covered with an olive branch. Genius, flying with the arms of Saxony is seen on the right of the temple. Inside the front doors, Neptune with his trident reaches for Apollo. Mars in armor seen at the forefront, steps up near the temple as he hands his sword to Minerva on the left. Minerva, accompanied by an Amazon, holds an oar in her right and the Roman Empire standard in her left. The legend translates, “Be present, Peace, and let thy gentle influence remain throughout the world”. The reverse lacks images and the legend translates, “Sweet peace concluded between Russia and Prussia, May 5, 1762; Prussia and Sweden, May 22, 1762; England, France, Spain, and Portugal, Feb. 10-16, 1763; Austria, Prussia and Saxony, Feb 18, 1763.”