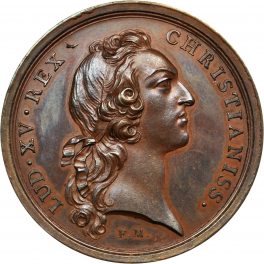 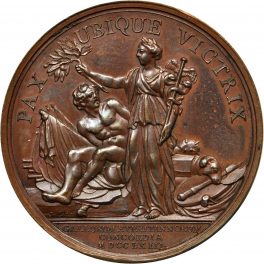 History, Information, and Value of 1763 Peace of Paris Medal

The Treaty of Paris, ending the French and Indian War, was signed in Paris on February 10, 1763. This medal commemorates that peace. Obverse features Louis XV, facing to the right wearing a laurel crown over his wavy hair and a ribbon with the artist’s name “R. Duvivier. F.” The legend states, “Louis XV, our most Christian King”. The reverse displays Peace, standing and holding an olive branch in her right and a caduceus in the left. At her side a naked man sits on the instruments of war. The legend translates, “Peace everywhere triumphant. Harmony [or peace declared] between France and Great Britain, 1763.” The artist’s signature “J.C.H” is engraved on the left near the edge.