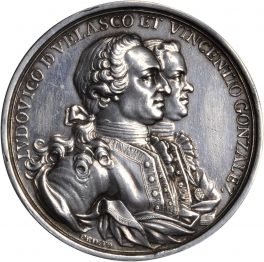 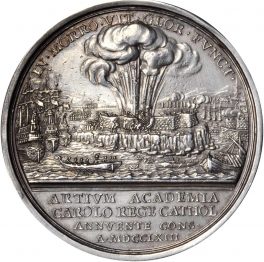 In August of 1762, fourteen thousand British soldiers stormed the Morro Castle at Havana and gained the city. This medal commemorates the many who died. Obverse depicts two Spanish officers, Luis Vicente de Velasco and Vicenzo Gonzalez who died while guarding commanding Castillo de los Tres Reyes Magos del Morro. Both officers face to the right, wearing their uniforms, their hair tied back. The legend gives their names. The reverse displays the final decisive move during the battle, in which the magazine exploded. A small mushroom cloud follows the explosion, with men caught up inside it due to the blast. Soldiers storm the breach in the wall. Several ships rest in the harbor and a boat with men in it moves to the left. The legend translates, “They ended their lives in glory in the Morro Castle” and in exergue, “The Academy of Arts, Charles the Catholic King consenting, has consecrated this [to their memory] in the year, 1763”.