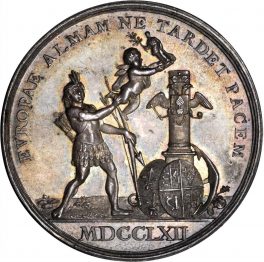 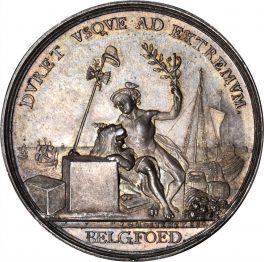 History, Information, and Value of 1762 Europe Hopes for Peace Medal

This peace and victory medal was created in the neutral Netherlands, which explains the eagerness for peace, so trade and commerce can resume. Obverse depicts an Indian who represents America, supporting a cupid who attempts to place Peace on the column. The column features two shields at the base, one for France and the other for England, and an anchor. An eagle for Germany is near the top, next to the fir cone of Augsburg. The legend translates, “May it not delay the fair peace of Europe.” Reverse pictures Mercury sitting on the Belgium lion and holding a branch in his left hand. The lion’s paw supports a staff, arrows and the cap of liberty. In the background are several ships and some boxes for trade. The legend around the scene states, “May it endure forever” and in exergue, “The United Netherlands”.