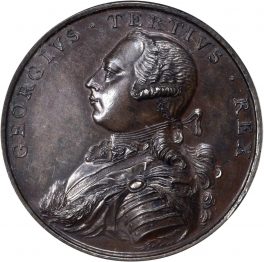 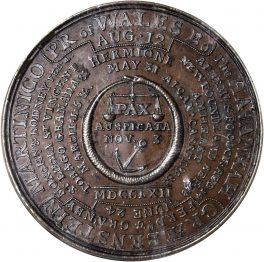 History, Information, and Value of 1762 Victories in West Indies and Newfoundland Medal

Value of 1762 Victories in West Indies and Newfoundland Medal

This celebratory medal commemorates British victories in the name of peace to the natives. The obverse pictures a bust of a youthful George III, facing to the left, wearing armor and his wig tied back in a bow. The legend over his head states, “King George III”. Reverse depicts a small snake in a circle, in which an anchor and set of scales surround the Latin words for, “Peace foretold, Nov. 3”. The year below the circle is 1762. Four groups of circles surround the center. Starting at 1 o’clock and going counterclockwise reads, “PR of Wales, Bo | Aug 12, Hermione | May 31; Havannah | Albeml & Pocock. Aug 14 | Newfoundland Sep 18 | Amherst | Alcona. Cassel & Co; Grabenstein | Ferdd. & Granby | June 24; Martinigo | Monckn & Rodney Feb. 4. | St. Lucia St. Vincent | Tobago, Granada & Co | March 14 & co.”