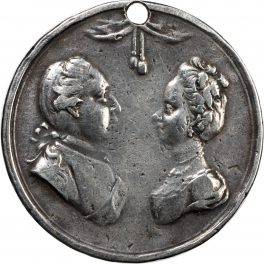 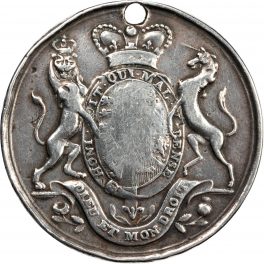 This rare British-Indian medal was supposedly distributed to the Indian chiefs at the close of the French and Indian War as an appreciation for their assistance. This medal displays a bust of the youthful George III on the obverse, facing to the right. He wears armor, the ribbon of the Garter, and a wig, which is tied back with a ribbon. Across from him, under the drapery, is a bust of his wife, Queen Charlotte, facing to the left. She wears four strings of pears around her neck and lace edging on her dress. Reverse displays the Royal Arms on an oval shield held up by a lion on the left and a horse on the right. The two animals stand on pedestals, beneath which are flowering roses and leaves and thistles. The Latin on the Garter translates, “Shame on him who thinks evil of it” and the motto translates, “God and my right”. A crown rests at the top of the shield.