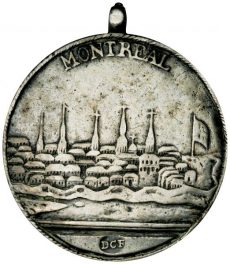 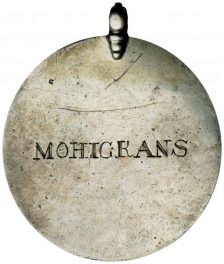 This rare and historically important medal was one of the earliest Indian peace medals made in the United States. One hundred and eighty-two Indian peace medals were created and fewer than eight now exist. Obverse displays a fortified town with five bastions behind a flowing river. The legend declares this as the city of Montreal. The exergue names “D.C.F.” or Daniel Christian Fueter as the engraver. Fueter was one of New York’s most famous silversmiths and he maintained a thriving business producing medals made of Indian silver that he frequently sold to the British. Reverse displays the name “Onondagoas” across the center of the medal. The legend states, “Rev. Tekahon waghse” and in exergue “Taken from an Indian Cheif [sic] in the American War, 1761”.