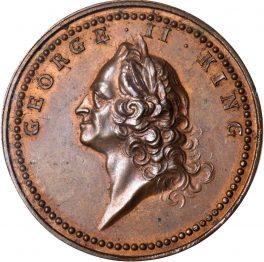 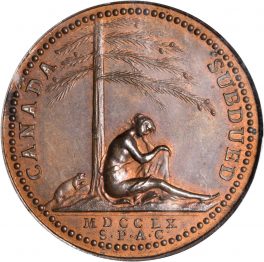 Obverse of this rare medal depicts a bust of George II, facing to the left, wearing a laurel crown on his curly head. The legend simply reads, “George II, King”. Reverse displays an unknown woman, weeping under a coniferous tree. To her left a beaver sits. The reverse legend states, “Canada subdued” and the exergue, “1760. Society for Promoting Arts and Commerce”. On some medals “William Pitt Administring [sic]” is visible on the edges.