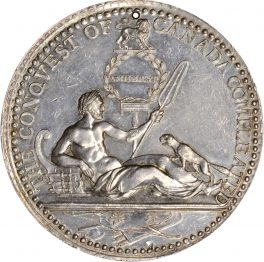 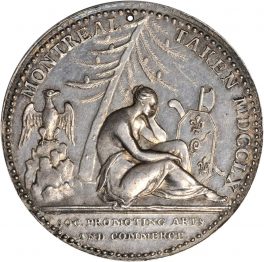 This medal depicts a man on the obverse, assumed to be St. Lawrence, reclining as he holds a paddle aloft. He wears a laurel crown and draped cloth and leans back against a galley. A beaver climbes up his left leg. Near his head rests a laurel circle, the name “Amherst” engraved inside. A lion, of Britain, tops the circle. The legend reads, “The conquest of Canada compleated [sic].” Reverse displays a woman, sitting on the ground her left hand covering her face. Behind her leans a conifer tree. To her right rests a French shield, club, and tomahawk, and to her left stands an eagle, wings outspread, on a pile of rocks. The legend reads, “Montreal Taken, 1760” and in exergue, “Society Promoting Arts and Commerce”.

The obverse and reverse text read as follows: The Conqvest of Canada Compleated [sic] | and | Montreal Taken MDCCLX; Soc Promoting Arts | And Commerce .