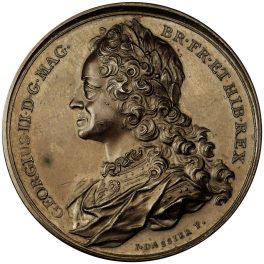 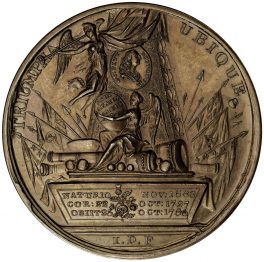 This highly detailed medal commemorated the British victory and mourned the death of George II. Obverse features a bust of George II, facing to the left, wearing armor, draped, and his hair curling about his shoulders. The legend states, “George II, by the Grace of God, King of Great Britain, France, and Ireland”. The reverse depicts Victory sitting on a cannon on a pedestal, which has “Born Nov. 10, 1683; Crowned Oct. 33, 1737; died Oct. 25, 1760” inscribed on it. Victory displays the names, “Asia, Africa, America, Europe” on the shield in her hands. Above her head, a winged Fame moves the curtain from the face of William Pitt on a medallion. In the background are half-raised flags. Both sides of the medal are signed by the artist, J. Dassier F.